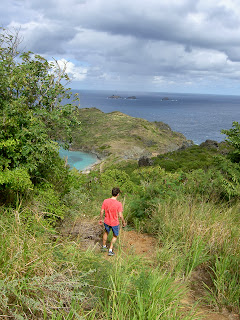 While I was on St Bart's, a lovely French island where plutocrats play, I had a chance to chat with the image-savvy CEO of a major tech company based in California (not Google). We were talking about privacy in Europe, and she said:  "yeah, I know, Europeans think different, Nazis and stuff".  Then she realized I was not an important person, and turned away to talk to someone else.

Indeed, stuff... She's right, of course, on a basic level, that privacy expectations reflect each country's culture, history and ideology.

But the Nazis and stuff don't quite explain Europe.  Take France, and its "stuff".  I love France.  I love the country, the people, the culture, the language.  I do not love its government.  I think France is poorly governed by an entrenched "political class" and run by an army of grumpy functionaries and enslaved to a socialist ideology stuck in a 1970's rut.  And lots of people think that it will be run by the far-right Front National in a few years, as mainstream voters get sick of their "mainstream" parties and Socialist taxocrats.

France is a deeply conservative society, in the sense that it does not like change.  This country is deeply uncomfortable with globalization, and even with capitalism, based on a widespread pessimism that France's best days are behind it.  Innovation is not popular in a country that thinks it's more likely to lose from the change that innovation brings.  The innovation that is popular in France is inventing new taxes (innovating a new global financial transactions tax?, innovating a new "data" tax? innovating the highest marginal income taxes in the world?).

Paris was once more welcoming to foreign businesses.  The Economist's article recently struck a lucid and painful blow to French self-esteem:   The article pointed out that Paris was Morgan Stanley's first international office, a decade before London!  Can you remember the 1970's and 1980's, when American technology giants like IBM and Microsoft chose Paris as their European headquarters?  The entire new generation of American tech companies have chosen London or Dublin or Luxembourg or Zurich for their European headquarters. I can't think of a single American company that has chosen Paris for its European headquarters in the last two decades. Understandably, this is all hard for Paris to swallow.
Against this background, it's easier to understand why the French government is campaigning to weaken the European Commission's proposal to institute a one-stop shop in Europe.  Most US companies would find their lead regulators in Dublin or London or Luxembourg.  As far as I know, not a single foreign company would have its "main establishment" in Paris.

Looking at the increasingly barren business landscape in Paris, I'm reminded of Voltaire's advice:  "Il faut cultiver notre jardin".  I'm often amazed that anything grows here at all, like a pretty flower in the dry, hostile desert.
Posted by Unknown at 2:09 PM