On the sidewalk in Milan

I was relaxing with a glass of chianti watching The Bourne Ultimatum on tv. The shadowy authorities use surveillance technologies to try to track down Jason Bourne.
So, I'm no Jason Bourne. Back in January 2008, as I've blogged before, I was surrounded on a sidewalk in Milan in front of the ancient University by 5 Italian policemen. Many confused thoughts went through my head at that moment, as I'm sure you can imagine: fear, confusion, surprise, indignation. But also, a nagging question: how did these policemen know that I would walk down this sidewalk at this moment in a foreign city and how did they recognize me on a crowded city sidewalk?
As anyone who's checked into a hotel in Italy knows, the first thing that Reception asks you for is a passport. This is also true in most European countries. It's for the police. There is zero transparency or choice in this process: no one I've ever met knows where this data goes or how long it's kept or what it's used for. Needless to say, if you're sharing a room with another person, the police will know this too. You do not have the option of checking into your hotel room anonymously.
In my case in Milan, I don't think there was any great use of police surveillance technology. I'm guessing the police were waiting on the sidewalk because there had been some minor press coverage before the privacy conference where I was scheduled to speak. I assume they downloaded a photo of me from the web and knew from the conference program roughly when I'd be arriving. Why five policemen were sent, I have no clue. Were they expecting me to make a run for it, like Jason Bourne?
According to independent reports, Italy leads the world with more wiretaps per capita than any other country. Wiretaps in the age of the cell phone now include location information.
http://www.theregister.co.uk/2007/03/07/wiretap_trends_ss8/
I've always enjoyed the freedom of walking down the streets of foreign cities with the liberating sense of anonymity. I feel a little less free now. I hope technology will find a way to put users in control of their location information. I'm off somewhere else now, but come to think of it, I'd rather you didn't know where.
Posted by Unknown at 10:46 AM 3 comments: 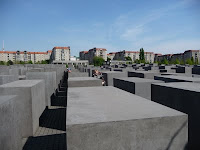 And while I was in Berlin, I visited the Holocaust memorial, as I always do when in Berlin, and I wondered about the "right to be forgotten" in the midst of the memorial to "never forget".
Posted by Unknown at 5:19 PM 2 comments: