Here’s an interesting article about the day-to-day challenges and contradictions of national laws in the context of the global Internet (ok, it does use some of us Google guys as unhappy examples, but just to make a valid point):

I’m off to Berlin now. Germany is one of those places where I feel the need to listen more than talk. I'll blog about what I learn afterwards.

Posted by Unknown at 3:49 PM No comments:

But in the spirit of the day, now that I’ve skimmed the news and reassured friends that I’m not going to prison (I hope), I’ll go about my day:

I’ll do some planning for my Dad’s 80th Birthday Party, do a kick-boxing class at gym, work on an academic privacy paper on the hotly-debated question of whether IP addresses should be considered “personal data” under EU law, give legal advice on some privacy questions, prepare for some meetings in Berlin, and, best of all, I’ll end the day with a candle-light dinner with the person I love in the city I love.

That’s a lot to be thankful for (well, not the Berlin or the Milan parts), but the rest anyway.

As you can imagine, I've spent a lot of time researching European law on hosting platforms. International legislation recognizes that hosting platforms like Google Video are neither the creators nor the controllers of content. The European Union's Electronic Commerce Directive, enacted in 2000, sets a clear legal framework for establishing liability for unlawful content on the Internet. It provides a safe harbor for entities acting as intermediaries, drawing a clear line between those who create content, and those who, in their capacity as technological intermediaries, provide the tools to make this content publicly available. By establishing legal certainty and creating a single EU-wide standard, the E-Commerce directive allows the development of open platforms that promote free expression and the free flow of information on an unprecedented scale, and play a crucial role in the development of the new economy in Europe.

How does the E-Commerce prescription work in real life? Say an Internet user uploads a video filled with illegal hate speech, nudity, or violence. When notified of this illegal content, the hosting platform is obliged to take it down. The hosting platform, however, is not obliged to monitor and prevent the upload. The responsible party is the Internet user who posts the content. In this case, Google did exactly what the law requires - it removed the content upon notification, and took the further step of complying with law enforcement requests, helping to bring the wrongdoers to justice.

If Google and companies like it were responsible for every piece of content on the web, the Internet as we know it today – and all of the economic and social benefits it provides – would disappear. Without appropriate protections, no company would be immune: any potentially defamatory text, inappropriate image, bullying message or violent video would have the power to shut down the platform that had unknowingly hosted it. In the offline world, it would be like criminally prosecuting post office employees because someone mailed an inappropriate letter. European law recognizes the importance of providing limitations on the liability of hosting platforms.

From a public policy perspective, it wouldn't make any sense if it didn't apply to criminal charges. The objective of the directive was to foster a competitive and dynamic knowledge-based economy in the EU. To provide an environment in which its citizens would have access to inexpensive, world-class communications infrastructure and a wide range of services. To create conditions for e-commerce and the internet to flourish. To enhance quality of life, to stimulate innovation and job creation, and to contribute to the free flow of information and freedom of expression. Those are words directly from the Commission. It wouldn't make any sense to apply these protections only to civil matters; doing so would permit criminal claims to eviscerate the very benefits the directive sought to achieve.

Today in Milan, the Milan Public Prosecutors’ Office will make their closing arguments why 4 Google employees including me should be held personally criminally liable for content created by four Italian high school students and uploaded to Google Video. I have no idea what the Prosecutors will say in court today, and my lawyers have told me not to set foot in Italy, so I wanted to provide some factual background on this case.

The Judge hearing this case is Judge Magi, who recently convicted 23 Americans, mostly CIA agents, as reported by the New York Times:

In a landmark ruling, an Italian judge on Wednesday convicted a base chief for the Central Intelligence Agency and 22 other Americans, almost all C.I.A. operatives, of kidnapping a Muslim cleric from the streets of Milan in 2003.

Today’s trial stems from an incident in 2006 when teenagers at a school in Turin filmed and then uploaded a video to Google Video that showed them bullying a disabled schoolmate. Google removed the video promptly after being notified. Even so, last summer, the Public Prosecutor brought the following criminal charges against four Google employees, including myself. All of us face one or two charges:

Charge A: Criminal defamation against the Vivi Down Association, an association that represents individuals with down syndrome

Charge B: Failure to comply with the Italian Privacy Code

It should be obvious, but none of us Google employees had any involvement with the uploaded video. None of us produced, uploaded or reviewed it.

I won't be attending my trial in Milan in person. I'll be represented by outside counsel. I believe that each of my 3 co-defendants has reached the same conclusion. As for me, I'm under clear instructions from my outside counsel not to set foot in Italy, at all. That's a tragedy, since I love Italy. It means I won't be speaking at this privacy conference in Bologna in May, which still seems to be advertising me as a speaker:
http://www.sassuolo2000.it/2009/11/17/bologna-la-privacy-al-tempo-di-facebook-8-incontri-ad-alma-graduate-school/
It also means I won't go hiking with friends in the Dolomites this summer.
Why? Well, Italy has a legal concept which is unknown in Anglo-Saxon countries: namely, that an employee of a company can be held personally criminally liable for the actions or non-actions of the corporation he works for. Moreover, Italy has also criminalized much of its data protection laws, meaning that routine data protection questions can give rise to criminal prosecutions. As everyone in the field of privacy knows, data protection laws are full of sweeping statements that need to be interpreted with judgment and common sense. But imagine the consequences if every data protection decision made by a company can be second-guessed by a public prosecutor with little knowledge of privacy law. Does that mean that a data protection lawyer working for a company is running the risk of personal criminal arrest and indictment and prosecution for routine business practices? Well, I guess you can see why I've been advised not to set foot in Italy. I'm sure such prosecutions will remain rare, and perhaps my current prosecution will the be last of its type. But maybe not. And working for one of the world's most visible Internet companies puts me at more risk than most of my colleagues in the field of data protection, as the current prosecution has shown.
Italy is my favorite country in the world to visit. What a shame.
Ciao, Italia!
Posted by Unknown at 9:05 AM 2 comments:

On Trial in Italy

I'm relieved that the Google "privacy" trial in Italy is finally underway. This week, the Milan Public Prosecutor will make his case why four random Google employees should be held personally criminally liable for a video that some high-school kids in Turin made and uploaded to Google Video.
For me, I've lived under this Sword of Damocles for two years now. It began in January 2008 when I was invited to speak at a privacy conference at the University of Milan. I was approaching the University on foot, when I heard someone call my name. I turned around, and saw a guy in plain clothes, who told me to wait a minute, while he spoke into a cell phone, and within seconds, I found myself on the sidewalk surrounded by 5 Italian policemen. I had no idea what was going on. I was scared. I couldn't understand much, but I did understand that they wanted to take my passport, asked me to sign some documents, and wanted to escort me to a judge. I was allowed to put a call into my Italian colleagues at Google, who thankfully were able to rush to the scene and talk to the policemen. I was escorted by the policemen on foot through central Milan, with tourists and locals alike stopping to stare at the scene. My colleagues told the group of policemen that I was supposed to deliver a speech at the privacy conference shortly. After much discussion, it was agreed that I would be allowed to deliver the speech, after providing my passport and signing various documents that were being served on me, and that I would be interrogated by the Public Prosecutor afterwards.
And so, I was allowed to deliver this talk. If I look a little distracted, now you know why. [between us, I had to stop to vomit, but that part has been edited out.]
http://www.youtube.com/watch?v=ZkN12ZR9dvE
This whole Italian prosecution has been an ordeal. I just want it to be over soon. After two years, well, it's finally underway.
Posted by Unknown at 11:23 AM No comments:

First, thanks to a bunch of you for sending me notes, encouraging me to keep blogging. I will.
I recently joined a group of privacy experts working with a Spanish foundation dedicated to children's issues to think about how to help protect kids' privacy online, in particular in social networking services. We've just had one inaugural meeting, a brainstorming session. It's too early to say which approach the group will take. But for my part, I recommended a crowd-sourcing approach, where we encourage (sponsor?) an open-ended contest to invite people to create videos on YouTube where kids talk to other kids about privacy. I doubt a top-down approach would work, where governments or corporations lecture kids about what they should or should not do online. I think kids will react more to videos by other kids, who talk about sharing with their friends, what happens if they share personal stuff with the wrong people, how to make good choices.
If you have a better idea about how to approach the challenge of sensitizing kids about the privacy risks when they post stuff online, please let me know, and I'll take it to the group.
Posted by Unknown at 9:28 AM 1 comment:

I've been taking a break 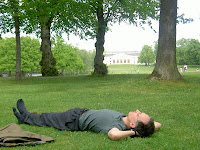 I've been taking a break from blogging.
In case you wonder why, it's because I was rattled to see an Italian public prosecutor scour my blog and print out copies of it to help him indict and prosecute me and some of my Google colleagues for some "privacy" criminal theory. I'm all for free speech, and love a robust debate of privacy issues, but seeing your own words being combed through by a prosecutor who's looking for evidence to convict you in criminal court is enough to give anyone reason to pause from blogging.
I'll start blogging again soon. At least I know I have one reader.
Posted by Unknown at 3:38 PM 2 comments: