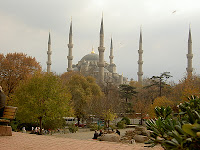 We need more public debate about what the "right to be forgotten" should mean. We also need a debate about how it should be applied to hosting platforms and search engines. I think a balanced and reasonable and implementable approach is possible, based on a few principles: 1) people should have the rights to access, rectify, delete or move the data they publish online. 2) people should not have the automatic right to delete what other people publish about them, since privacy rights cannot be deemed to trump freedom of expression, recognizing that some mechanisms need to be streamlined to resolve these conflicts. 3) web intermediaries host or find content, but they don't create or review it, and intermediaries shouldn't be used as tools to censor the web. Stay tuned, and Happy Data Protection Day.
Posted by Unknown at 6:57 AM

Hi Peter! I love your blog. Why don't you post on Google+?

Nice summary of the issues Peter.

Thanks Peter for the summary.
We are working with the misnamed "right to be forgotten" in Spain, and your text was useful on our company.