Hey, Mom and Dad, look, I'm the most powerful censor on the planet 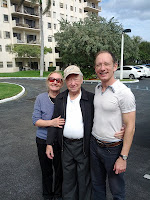 Not really. But I could be.

Europe's proposals to create a "right to be forgotten" are suggesting that people should be able to request Google/Yahoo!/Bing to delete any third-party content from the search engines that they don't like, if it violates their sense of "privacy". If such a law were to be passed, then it would mean that employees at Google and similar companies would become censors-in-chief of the world's web content. Whenever someone finds something on the web that they found unflattering about themselves, they could demand that the search engines delete it. The Google/Yahoo!/Bing global censors would then be obligated to delete the content, regardless of whether it was true or fair or legal, regardless of who published it, and regardless of the fact that the search companies had nothing to do with the content.

Hmmm, the prospect of becoming the world's most powerful censor makes me giddy. Eat your hearts out, you Iranian web censors, now I've got the sort of power you've only dreamt of. History, truth, memory, knowledge, it's all mine, mine, to decide what gets to survive. And a word of "merci" to the French, who put all this power into the hands of American employees like me. Now I can make Mom and Dad proud.
Posted by Unknown at 11:05 AM 1 comment: