Raise your hands if you’re worried about Data Retention! 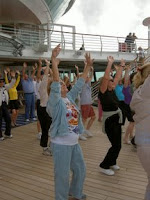 As Dan Quayle put it: “I believe we are on an irreversible trend toward more freedom and democracy – but that could change.”

It’s a flattering self-image in Europe to play Greece against the American Rome: confronting the clumsy boot of American government power with humanistic values like privacy. Witness the outrage in Europe over the transfers from Europe to the US of airline passenger name records or financial wire transfer data. And it has become common knowledge in Europe that the US Patriot Act sacrificed privacy and other civil rights in favor of the “war on terror.” It’s time for us to take a look in the mirror: at Europe’s own reaction to the terrorism in Madrid and London, the Data Retention Directive.

I doubt most Europeans realize that the Data Retention Directive will require that telco’s and Internet “electronic communications service providers” (e.g., email providers) store all their traffic data for between 6 and 24 months. And do Europeans realize that some governments are trying to push the balance even further away from privacy towards the goals of law enforcement than required by the Directive? The German Ministry of Justice has drafted a law to mandate that email providers in Germany must verify the identity of their email customers, to stop the use of anonymous email accounts. The Netherlands Ministry of Justice has proposed a requirement to retain location data for 18 months, going far beyond the requirements of the Directive.

This massive invasion of privacy would be easier to swallow if the “bad guys” couldn’t easily evade being tracked anyway. Very simple technical measures allow anyone to use the Internet without leaving the tracks that the Directive would try to retain. In fact, it might be as easy as using non-European-based service providers. Today, Google does not verify the identity of its email users, and I can’t imagine it would start to do so, whatever the German law might say. I’m hardly alone in believing that users should be entitled to anonymous email accounts, for lots of reasons, ranging from a philosophic belief in the right to be anonymous online, to practical reasons, like trying to protect one’s account from spam.

If you have read the privacy news over the last few months, you would get the impression that the biggest threat to the privacy of EU citizens resulted from the transfer of pieces of their personal data to the US government, either when they fly to the US (those passenger name records) or when they do a financial wire transfer (using the “SWIFT” network of banks). If there is so much distrust in Europe about the US government getting its hands on such relatively minor pieces of data, why aren’t more people in Europe worried about their own governments getting access to vastly more data about them? Really, what’s more troubling: allowing the US government to see passenger information about the people on a flight from Amsterdam to New York, or allowing the government of The Netherlands to mandate that the location of every person in the country be tracked and stored for 18 months every time they use the Internet or the phone?

EU governments are required to implement the provisions of the Data Retention Directive into their national laws by 2009. They’re just getting started now, and the early indications are not good if you care about privacy.
Posted by Unknown at 11:31 AM

All the discussions of privacy focus upon the legality of it. Some laws prohibit businesses. Some laws prohibit prosecutors. What laws govern what intelligence services can and cannot do, and can and cannot share? We know that British do the work of the CIA within the United States. Does that also extend to collection of personal data that the Crown can use as its share in the partnership?