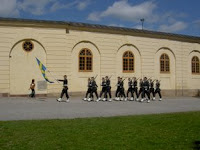 Recently, a new bill was introduced allowing the National Defence Radio Establishment (Försvarets radioanstalt, FRA) to intercept internet traffic and telephone conversations that cross Sweden's borders at some point. The FRA claims this additional surveillance power to be essential because terrorists and fraudsters now mainly rely on the internet to communicate. Operators will be obliged to co-operate with the legal authorities by channelling the data about their users to the FRA through so-called collection nodes (samverkanspunkter). While the FRA claims it is not interested in intercepting each citizen's emails and telephone conversations, it will nevertheless have the capability to do so once the bill is adopted. Citizens will not need to be suspected of fraud or any other illegal activity for their communications to be intercepted.

Apart from this stringent surveillance measures, the Minister of Justice also want to introduce a monitoring duty for internet access providers. Minister Beatrice Ask indicated that she wants access providers to be responsible for blocking illegal internet content. Strict legislation would be adopted if the internet service providers do not take their responsibility. The Minister's position is remarkable, as European eCommerce legislation explicitly forbids imposing this type of general monitoring on access providers. It also raises the question on which types of content should be considered illegal enough to warrant blocking, and runs the risk of crippling freedom of speech.

Technical experts are not convinced that massively storing and monitoring communication data will indeed aid in the fight against terrorism and fraud. For one thing, terrorists and fraudsters can easily use special tools (such as encryption) to circumvent any wiretapping. When telephone companies and internet access providers are required to monitor, filter and store communication data, costly investments are required. In Sweden, as in most European countries, the law provides no proper compensation for these investments by the government. Obviously, end-users will – literally – pay the price for having their conversations monitored.

Technical feasibility and high costs aside, I think the most important objection against wiretapping and storing data is that they interfere with every citizen's private life, communications and freedom of speech. By storing and being capable of monitoring data about every single phone call, fax, email message and website visited, safeguards provided by the European Convention on Human rights and the European Data Protection Directive are effectively undermined.

Sometimes, a government has to make difficult choices. It would be a sad day for Sweden, if it passes the most privacy-invasive legislation in Europe, and thereby puts itself outside of the mainstream of the global Internet economy. And don't get me wrong, I love Sweden. That's why I care.
Posted by Unknown at 6:27 PM

My government wants to spy on me! :-(

It was voted through yesterday, and I'm immediately developing more and more of an urge to move to some country where personal integrity and privacy actually means something. Denmark; will you have me?

Could the case be brought to the European Court of Justice, given that it might violate the 1995 data protection directive?

By the way, the French are also leaning towards similar measures... I wish the European Parliament could react and remind all EU governments that they must protect individual rights.

The EP cannot react because they are a sentate. The real power is part of the European Commision: The power to legistale. This body is not voted in.

Right now swed nav cooperate whit nato in base on sardin, and swed have work thogheter since -60 and they have .... and USA have supplied it. So much for swed neutrality and the govermen has allways lied to public, you shold now how spol work and ther technics they have. ex they have root access to phone operator sys so they can do what they wont whit out permissin.